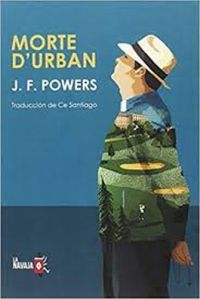 J. F. Powers Morte D’Urban won the National Book Award in 1963. This beautifully written book describes a different era of Catholic priests, in some respects unrecognizable but in other respects all too recognizable. It is a book with Franciscan connections as Powers attended a Franciscan high school in Quincy, Illinois and was a conscientious objector in World War II. Powers represents the literary heights of a far broader Catholic Revival centered in Collegeville, Minnesota before Vatican II.

Powers describes and indicts the clerical culture of the booming post-World War II years in this comic masterpiece with both barbs and sensitivity to the struggles of the protagonist, Fr. Urban Roche, a man of considerable talents and shortcomings. Fr. Urban is a nationally famous speaker within a very parochial and benighted fictional group of priests and brothers called the Order of St. Clement. Fr. Urban thinks big and has very broad and inclusive vision that often clashes with the leadership of his Order. Fr. Urban attracts some very wealthy patrons who help him achieve a number of his goals, but not without a price.

The novel captures the rivalries and tensions within the pre-Vatican II Church. We see Fr. Urban as an Irish-American priest who is in equal parts beleaguered and constrained by his Polish and German confreres. His breadth of vision almost never goes unchallenged, but he always handles himself with an almost preternatural equanimity and charm. He runs awry of the provincial administration and his wings are clipped as he is forced to move from Chicago to the fictional outpost of Duesterhaus, MN, which he does with aplomb. He soon sets about improving the retreat house there.

Long before our more recent War on Christmas, we see Fr. Urban confronting a War on Christmas in Duesterhaus. The Superior of the house has been on a crusade “to get people to go to church more and to shop less during the Christmas season” (p. 87). This has upset the local merchants, but Fr. Urban smooths things over. Ultimately, things devolve into hilarity as they focus on the Christmas mangers and start arguing about whether Christ should be there before Christmas. They decide he should not, but then why are Mary and Joseph there if Christ is not…and things go downhill from there. This is about as theological as things get in the general conversation among the priests and brothers, but Fr. Urban is capable of much more.

The more serious parts of the book revolve around the struggle to fight mediocrity within the Order and the claustrophobic Church. We see a lot of high-living Irish-American priests. The role of the laity in leadership is almost non-existent. They are compliant in most matters, but the wealthy get most of the attention and do serious damage at times. Fr. Urban is frequently overlooking the indiscretions of his benefactors, but he does have a conscious and ultimately pays a very high price when he finally takes a stand. In perhaps the most brutal part of the book, the areligious daughter of one of his benefactors confronts him as an “operator”: “I mean you’re an operator—a trained operator like Mrs. Leeson, and an operator in your heart—and I don’t think you have a friend in the world” (p. 301). This proves to be very true. The clerical culture depicted in the novel is full of those climbing and falling, but we see that the priesthood can be a very lonely world – a gilded cage.

As Fr. Urban is forced to confront his failures with the laity, he suddenly begins to garner much more prestige within the Order. His breadth of vision and inclusivity are recognized as admirable traits, but the setbacks have taken the wind from his sails. He is elected Provincial as his confreres grasp the need for a partnership with the laity, especially the benefactors who can do so much to help them out of their financial difficulties. Fr. Urban now falls into line with his predecessors and has a different set of priorities, hence, the name of the title Morte d’Urban (The Death of Urban). He was elected to change the Order, but the only things that changes is Fr. Urban in this eventually deeply cynical novel.

Some argue that Powers depicts the victory of grace over secularity here. While Fr. Urban was very urbane, he never strayed from his vows, at least not from chastity and obedience. Although Powers clearly ridicules Fr. Urban’s worldliness, I don’t think he ridicules his inclusivity. There is little attractive about his early adversaries. Fr. Urban ends up more pious in the end, but it does not seem like a choice, rather it is an accommodation to illness. Powers could be compared to Flannery O’Connor who also focused on grace, but there is also a subtlety and sympathy to Fr. Urban’s larger vision that I think other critics fail to notice.