The Line Becomes a River: Dispatches from the Border by Francisco Cantú 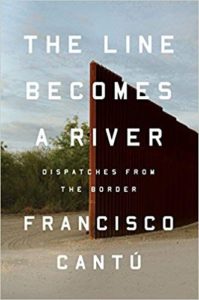 There were a lot of controversies surrounding this book when it was published. The author was accused of profiting from sharing his experience as an agent for Border Patrol, an organization with history of abuse and violence towards migrants and border communities. When I met Francisco at an event held by Catholic Community Services in Tucson, however, I had a hard time picturing him as a masochistic, hard-nosed law enforcement agent.

This first impression made more sense as I was reading his book. In it, he bares his soul and shows us the inner conflicts that constantly haunted him during his time with the Border Patrol. Some of those anxieties came appeared as vivid dreams as he was sleeping. In one of those dreams, Francisco encountered a wolf who offered his paws to him. If this story sounds familiar to you who have been hanging around the Franciscan world, it is by no means a coincidence. Francisco shares how his mother used to read him The Little Flowers of St. Francis when he was little. This story subliminally came back to him during the time of his darkest inner struggle.

This book gives us a firsthand example of how our broken immigration system is affecting not just the migrants who are often victims of violence and injustice and are living in constant fear. Those who have been charged to crack down on those migrants must also face hard moral dilemmas. Unfortunately, many of them choose to numb their humanity in order to keep performing their “duty.” My hope is that more and more of our politicians and law enforcement officials have the courage to respond to their inner moral struggles and let their humanity shines through. Only then can we start treating our migrant brothers and sister in a more humane way, according to their inherent dignity as beloved children of God.