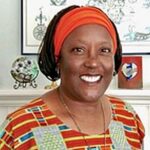 Black History Month provides another opportunity for us to understand the history, experiences, thoughts and feelings of our African American sisters and brothers. It encourages us to reflect on the past, but as importantly, on how we will participate in the creation of a more relationship-oriented and just future.

Sister Irma Dillard, RSCJ is a social activist dedicated to educating and empowering the voiceless to find their voices and take direct action for justice. She is a Change Management Consultant working with not-for-profits, unions, and parishes. She is a friend of the friars, a fan of the Franciscan movement, and has graciously agreed to share her reflection on Black History Month 2021.

Black History Month was first proposed by black educators and the Black United Students at Kent State University, Ohio in February 1969: a celebration of achievements by Black Americans and a time for recognizing the central role of African Americans in U.S history.

The 60’s were a very tumultuous time! The Black Power Movement (1966) was gaining momentum.

I chose not to attend another Catholic school. I attended a predominately black high school here in Northern California. It was there I was able to righteously be fully black— no need to assimilate.

In 1968, we walked out of classes and took over the administration building. Our demands: more Black teachers, Black administrators, Black Studies, and a library including books by Black and other authors of color. With pride, energy and determination we fought for legitimacy, authenticity, equality, freedom, justice and the right to an equal education. We spent 2 nights & 3 ½ days occupying that space during negotiations.

1969 was a good year. We read what was happening at Kent State. 90% of our demands were met. I knew it was time that we black folks be recognized for the achievements and contributions since our forced arrival in America— in mathematics, the sciences, literature, music, technology, etc. Our ancestors were more than just slaves! We were more than musicians and athletes! It was past time for us to be proud black people—unashamed and unapologetic!

“To Be Young Gifted and Black” hit the airways on KSOL and everyone began singing this powerful song. We sang it every single day. My high school WAS black history—the past brought to life and the continued making of history. Posters and quotes of black achievement decorated the halls and classrooms. We finally had a more accurate curriculum and because of Kent State we also celebrated Black History Month for the first time!

The sacred words of Nina Simone were alive:

Sister Irma Dillard, RSCJ is a social activist dedicated to educating and empowering the voiceless to find their voices and take direct action for justice. She is a Change Management Consultant working with not-for-profits, unions, and parishes. With degrees in psychology and counseling, religious studies, and communications, Sister Irma has spent 40 years working with youth and their families, including juvenile offender programs, single mothers’ support groups, and serving three San Francisco parishes doing staff development, diversity training, and facilitating staff and parish retreats. Sister Irma has been and continues to be with the people in the streets, participating in Black Lives Matter, DC Women’s March, Fight for $15, Poor People’s Campaign, Rise for Climate, People’s Townhall SF, DACA/Dreamers and No Ban, No Wall. She is a leader in her religious congregation’s reparations to the descendants of the estimated 150 persons enslaved by her religious order in Louisiana.

Nina then wrote the “To Be Young Gifted and Black” for children in memory of her late friend Lorraine Hansberry.