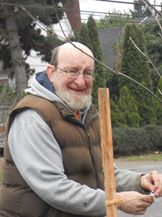 Brother Pat Groves O.F.M., is remembered by his brothers as a friar who followed the beat of his own drum. He was an artist, writer and musician known for his calm presence, gentle ways and dedicated service. After twenty-five years of being a friar, Pat decided to leave the friars but continued to live a life of simplicity. Twenty-five years later, Pat rejoined his brothers. He lived in the St Elizabeth friary and later at Old Mission San Luis Rey where he died in 2020. Below is a beautiful piece of music he created called, Lady Clare’s Farewell and a watercolor with an eastern influence. To see more of his art and writings, click on this link. http://www.patgroves.com